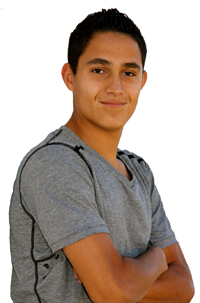 David Rodriguez graduated from Piedra Vista High School in Farmington, New Mexico. While attending Piedra Vista, he was on the academic honor roll all 4 years, keeping a 4.0 GPA. He graduated in the top of his class, served as a member of the Honor Society, and participated in the soccer and basketball team, winning first in his district for defense during his senior soccer season.

Thanks to his efforts, David was awarded a great opportunity to be part of a scholarship. David is the oldest of five children and his parents work hard so that all of them receive the priceless gift of a college program called UmattR. This program selects prominent high school leaders to serve as role models to younger kids while at the same time developing their skills to become future community leaders. While at UmattR, David and his peers planned various projects, this including going to schools and talking to children about making healthy choices free of drugs, alcohol and gangs. He is proud to have helped raise awareness and serve as an example to youth to embark on a successful future.

David is the oldest of five children and his parents work hard so that all of them receive the priceless gift of a college education. However, this is a huge financial burden to his family. David had to do everything in his power to help lift some of the financial burden off of his parents. He did so by working, and by applying to every scholarship he could. David is proud to share that he was awarded The Catholic School Boy of the Year scholarship award by his local chapter of The Knights of Columbus. He received this award because of his involvement and volunteering with his community. He is happy to say that in spite of difficulties, he has been able to push through it with the support of programs like CHCI and with the unwavering support of his family.

David is currently a freshman attending the University of New Mexico. He is making great use of his CHCI scholarship which not only provides him with the resources to help pay for college but also motivates him fulfill his goal of graduating from UNM. He aspires to graduate with a bachelor’s degree in business management. His long term goal is to graduate from the UNM Law School with a Juris Doctor degree. David would like to once again express his gratitude to the Congressional Hispanic Caucus Institute. CHCI has provided him with the opportunity to fulfill his goals and become a successful man. Thank you CHCI!