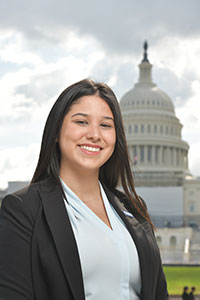 Jessica Martinez was born and raised in Hialeah, Florida – a predominantly Hispanic city where almost every interaction happens in Spanish. She is the daughter of two hard-working immigrants from Cuba who never failed to remind her she could do anything she wanted if she set her mind to it. From a young age, Jessica discovered a love for politics and her father nurtured that interest by engaging her in conversations on the subject.

As a CHCI Intern, she hopes to challenge herself and learn more about the legislative process so she can make room for others like her.