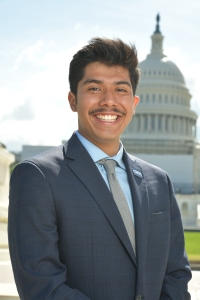 Miguel Vivar is a first-generation Mexican-American born and raised in one of the most ethnically diverse places in the world, Queens, New York. His parents immigrated to the United States from Puebla, Mexico to support their families back home. Being the first person in his family to go to college, Miguel understands the importance of education and moving forward as a Latino in the country because he is not only carrying himself but his whole family as well.

At Yale University, Miguel is pursuing a degree in Ethnicity, Race, and Migration and a certificate in Education Studies. He is the VP of Relations for Sube: Yale’s Latinx Pre-Professional Student Association, a mentor for Y Tu Tambien, where he guides first-generation low-income students from New York in their college application processes, and he is a volunteer at Havenly where he helps refugee and immigrant women identify career goals and connects them with employers and educational programs. Upon graduation, Miguel hopes to go to law school and focus on immigration law to defend undocumented immigrants and provide them with the resources they need to obtain residency and citizenship.

As a CHCI intern, he hopes to experience firsthand the policy-making process and how he can use such power to defend undocumented immigrants in the country. Miguel believes CHCI’s community will provide him with the opportunity to learn how to further empower Black and Brown voices in policymaking and defend those who aren’t given a voice.