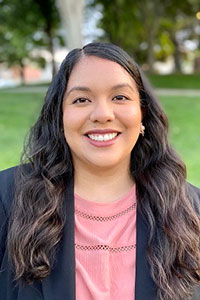 Sidney Betancourt was born and raised in East Las Vegas to parents from Peru and Mexico. As she was growing up, she witnessed how the 2008 financial crisis heavily impacted her family. As a result, she pushed herself to learn more about the multiple systems that changed equitable and affordable housing for her community’s families. She also became interested in working with individuals experiencing homelessness, which lead her to volunteer at agencies such as the Salvation Army and the Las Vegas Rescue Mission.

Sidney attended the University of Nevada, Las Vegas, where she earned a bachelor’s degree in Social Work and a Master of Social Work with a Management and Community Practice concentration. For one of her practicum courses, she worked at a homeless outreach agency in downtown Las Vegas where she teamed up with a legal aid agency to help quash the unjust warrants of individuals experiencing homelessness. She then went on to obtain an externship with Senator Cortez Masto, where she worked with constituents who needed assistance from federal agencies. She worked closely with individuals who struggled with different policy concerns, including housing, social security, and immigration.

As a CHCI Housing Graduate Fellow, Sidney hopes to learn more about Capitol Hill’s legislative process and connect with leaders in the D.C. community to have conversations about improving housing in the United States. Through the knowledge and networks that Sidney will gain from the program, she plans to run for office someday in local government with an end goal of working for the U.S. Department of Housing and Urban Department.