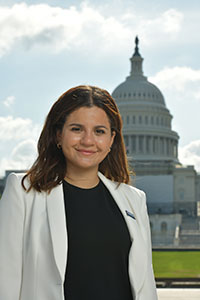 Valeria was born in San Pedro Sula, Honduras. Along with her parents, they immigrated to Hialeah, a bustling immigrant suburb of Miami, Florida. While Valeria first immigrated to Hialeah, Florida as an infant, she mainly grew up in the suburbs of Atlanta, Georgia. Growing up, Valeria recognized the hard manual labor her parents did to provide a better future for her and her three younger brothers. As the oldest of four children and the first person in her family to graduate college, Valeria recognizes the value of overcoming the obstacles many first-generation children face. A previous DACA recipient, Metzgen worked full time at Equifax to afford her college tuition while attending school full time in order to receive the company’s tuition reimbursement and pay for her education.

Valeria graduated from Georgia State University in May of 2022 with a bachelor’s degree in Public Management and Policy. While studying for her bachelor’s degree, Valeria simultaneously worked on projects at Equifax that included the creation of the first National Consumer Reporting Agency (NCRA) Spanish Credit Report which allows 62 millions Spanish speaking consumers access to their credit reports. Valeria hopes to go on to pursue a masters degree and lobby on behalf of financial conglomerates to increase access to financial literacy resources in the Latinx community.

As a CHCI Intern, Valeria hopes to gain further insight on how immigration reform and human rights policies can be strengthened by the government with the assistance of private companies.