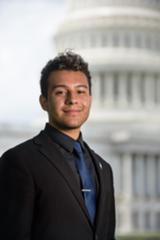 Victor Gonzalez was born and raised in Anaheim, California. He is a third year student activist at the University of California, Los Angeles (UCLA) and majoring in political science with a Chicano/a studies minor. His inspiration and motivation comes directly from his parents, who migrated to the United States from Mexico in search of financial opportunity.

Victor’s work as a student activist began when he learned about the Movimiento Estudiantil Chicanx de Aztlan (MEChA) at UCLA during the end of his first year. He joined the organization and began learning about the many issues that his community faces, such as access to higher education and criminalization. Throughout his few years in the organization, he coordinated culturally-relevant statewide chapter and youth conferences and worked as a high school tutor and counselor for youth across East and West Los Angeles, where he now currently serves as the tutoring program’s coordinator.

As a CHCI Intern, Victor hopes to continue his work in the community and influence change through policy and legislation. He hopes to build strong networks with other Latinos/as in policy and use this as a tool to provide more equity for his community.