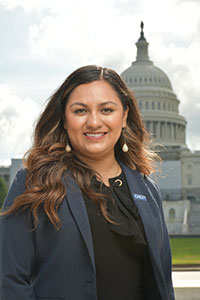 Xochitl is originally from Mexico but was raised in Utah after immigrating to the United States with her family at the age of 3 years old. She is a first-generation, non-traditional student, and DACA recipient who took nine years off school before returning to finish her bachelor’s degree now as a mother of two boys. She is passionate about advocating for social justice issues and understands the adversities of underrepresented communities. She currently serves as a first-generation mentor for First Generation Scholars at the University of Utah and is co-chair for SOMOS Dreamers- a student-led organization that advocates with and for undocumented students and mixed-status families. Xochitl created the first Latina Mothers Support Group held in Spanish at the University of Utah while interning with the University Counseling Center. She has always been determined to accomplish her goals to end her poverty cycles and make her family and community proud.

Xochitl is going to be entering her junior year of college in the Fall of 2022 at the University of Utah as a Social Work major. Upon completing her degree, Xochitl plans to attend graduate school and then pursue a Ph.D. Her ultimate goal is to work as a macro-level social worker engaging in public policy, while also being a therapist and advocate for underrepresented communities.

As a CHCI Intern, Xochitl hopes to learn more about the legislative process, as well as gain strategic skills to engage in public policy to create the necessary changes underrepresented groups deserve. She also strives to encourage other women in higher education who are mothers to pursue their goals and serve as an example that you can have the best of both worlds.