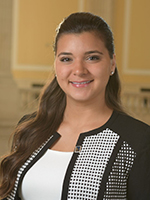 Alia Fierro is a Mexican-American who hails from the state of Illinois. Her Mexican-American upbringing instilled a heightened awareness and deep commitment to social justice issues that face underserved communities in the U.S. and abroad. Alia graduated with her B.A. in Latin American Studies with a minor in urban planning from the University of Illinois at Urbana-Champaign in 2013 and earned a Master of regional planning degree from Cornell University in May 2016.

Following her undergraduate career Alia went on to work closely with uninsured immigrant and Latinx communities, and facilitated the implementation of the Affordable Care Act at the local level. This work shed light on the place-based consequences of policy and access to resources such as housing, healthcare, and employment. While at Cornell, Alia focused on economic and community development, was President of both the Latina/o Graduate Student Coalition and Planning Students for Diversity, and worked with the Office of Academic Diversity Initiatives to improve first-generation student resources and support. In the fall of 2015, she worked on a team to understand how local upstate New York government officials respond to fiscal stress. She also spent a summer working on international development and human rights advocacy in Chiapas, Mexico, focusing on indigenous housing and land rights.

Much of Alia’s work encompasses her deep commitment to social justice and housing as a human right. While at CHCI, Alia hopes to become involved in the local Latinx community and looks forward to exploring the potential of coupling advocacy with comprehensive policymaking to empower underserved communities.