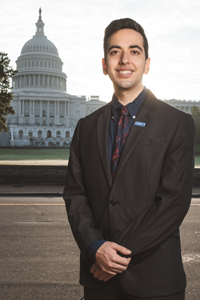 Charles Orta (he/him/his) was born and raised in Miami, Florida. As the son of Cuban immigrants who fled a communist regime, he grew up with a deep appreciation for the country that offered his family refuge and a desire to advocate for policies that benefit communities experiencing injustice. This led to a life-long commitment to public service. Charles is a first-generation college graduate, graduating magna cum laude from Harvard College with a Bachelor of Arts in Government and a Certificate in Latin American Studies. He subsequently earned a Juris Doctor and Master of Public Policy from Harvard Law School and Harvard Kennedy School, respectively, completing a joint curriculum focused on international law and policy.

Charles is passionate about human rights and national security. His professional background on these issues spans the NGO, journalism, public interest law firm, and government sectors. Most recently, he helped compile a database documenting states’ views on the role of international humanitarian law in regulating the use of emerging technologies in war as a research assistant for the Harvard Law School Program on International Law and Armed Conflict. Although most of his work has been internationally focused, Charles is equally committed to advancing policies that protect vulnerable communities domestically. To that end, he served as a law clerk for the Mexican American Legal Defense and Education Fund (MALDEF), where he advocated for the civil rights of the Latinx community and, among other things, drafted a public comment in response to agency action that denied students COVID-19 relief based on their immigration status.

As a CHCI-Facebook Graduate Fellow, Charles looks forward to exploring the many ways in which technology is affecting both national security and human rights. In particular, he hopes to contribute to ongoing discussions on strengthening cybersecurity, developing cyber norms, reducing digital misinformation and disinformation, and addressing the privacy implications of emerging technologies. After the fellowship, Charles aims to continue working on these types of issues within the federal government, helping minimize the impact of national security policies on vulnerable communities while increasing the representation of Latinos within
the U.S. national security and foreign policy communities in the process.