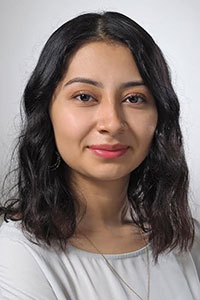 Tania Calle (she/her) was born and raised in New York City to Ecuadorian immigrant parents who taught her that “creer es poder.” Inspired by their perseverance, she earned a Bachelor of Arts in Political Science with a Concentration in Public Health from Williams College and received her MPhil in Public Health from the University of Cambridge. Her passions lie at the nexus of healthy equity, public policy, and immigrant rights advocacy. She strongly believes that health is a human right and the key to community empowerment.

Tania joins the fight for Latine empowerment as a public health and policy researcher focused on mapping the political and structural roots of Latine and migrant health disparities. For her undergraduate thesis, she investigated the impact of SB1070 and copycat policies on the health of Latine communities. She was also active in efforts to foster the Latine student community and advocate for migrant justice through her involvement with Vista, the Latine student organization, and the Coalition for Immigrant Student Advancement at Williams. Tania continued exploring the relationship between immigration policy and migrant health outcomes via her Master’s dissertation through which she examined the impact of Brexit on the health of immigrants residing in the United Kingdom.

Beyond her primary focus, Tania has been involved in many independent and collaborative projects that address a diversity of public health issues in the U.S. and abroad. Most recently, Tania conducted literature research on risk factors for severe COVID-19 infection and its long-term symptoms for the Office of the Assistant Secretary for Planning and Evaluation at the Department of Health and Human Services. Previously, Tania also served as a Minority Health International Research Trainee and supported a qualitative study on the social determinants of adolescent pregnancy in peri-urban communities in Ecuador. These experiences alongside others related to maternal, mental, and nutritional health have further affirmed her passion and commitment to public health research and advocacy.

As a CHCI-DaVita Health Graduate Fellow, Tania looks forward to learning more about the political levers and stakeholders involved in transforming the U.S. healthcare system and contributing to work that advances health equity and healthcare access for all.