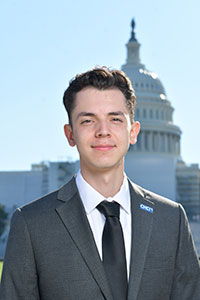 Christian was born and raised in Denver, Colorado by his mother who is a first-generation American, and his father who emigrated from the state of Zacatecas, México. Growing up in a predominantly minority neighborhood, Christian witnessed the consequences of a disregard for the education, safety, and health of its marginalized residents. He was in high school when he realized how rooted these problems were in politics and developed a passion for wanting to be a part of the solution.

Christian is currently a junior at Regis University majoring in politics and is exploring various post-grad options to best prepare himself for a career where he can tackle the issues he is passionate about, including immigration reform and gun control. He serves on the executive board of 1Leads, a first-generation student group at his university that prioritizes providing support and resources to students who are navigating the college world, virtually by themselves. He uses his own experiences as a first-gen college student to promote the importance of advocacy and action. He also served as one of the lead leadership developers at his previous employment where he discovered that to be a well-rounded leader, you must be able to develop and support the leadership skills of those around you as well.

As a CHCI Intern, Christian hopes to explore the complexities of the legislative process, strengthen his overall leadership skills, and build relationships with peers who may become future collaborators in his advocacy for his community at Regis, Denver, and beyond.