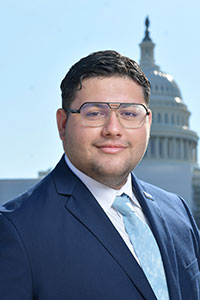 Derek was born in Arecibo and raised in a seaside neighborhood in Isabela, Puerto Rico by his single mother. Born in a socially affected Puerto Rico he understands the importance of accessible education and the importance of completing it. Derek attends the only Public Higher Education in Puerto Rico’s Archipelago, The University of Puerto Rico. On the University of Puerto Rico Aguadilla’s Campus, Derek was the first openly LGBTQIA+ person that occupied the Presidency of the General Student Council. Participating in distinct deliberating spaces, he advocated for the accessibility of public higher education and the rights of LGBTQIA+ inside the institution.

Derek is currently a Junior at the University of Puerto Rico, Mayagüez Campus majoring in Political Science, as well as a teacher preparation certification with a History specialty. Upon completing his undergraduate degree, Derek hopes to obtain a Juris Doctor and a Master’s degree in Government and Public Administration. His ultimate career goal would be to obtain a Doctorate and work as a Public Administrator in offices that affect disadvantaged communities.

As a CHCI Intern, Derek seeks to strengthen his knowledge of the legislative process that directly affects the Puerto Rican people as well as gain insight into U.S. politics. He hopes to be able to use this experience to make a difference in his community on how we can aspire to take up spaces to build a better society.