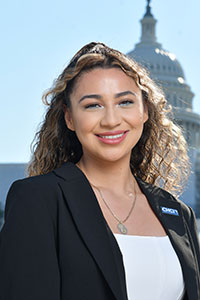 Diana Giselle Garcia was born in Los Angeles, California as the youngest daughter of an immigrant family. Later, her family was relocated to South Gate, California where she was exposed to the social and environmental inequities within her community. While studying at the University of California, Berkeley, Diana began to recognize her lived experiences and identity as a victim of environmental injustice and racism which fueled her passion for advancing social and environmental justice through public policy.

In May 2022, Diana graduated with a major in Conservation and Resource Studies and a minor in Public Policy. Diana was a Fung Fellow and a Cal-in-Sac Fellow at her institution which prepared her to effectively intern at state and local governmental offices. Through internships with the California State Lands Commission, the District Office of Senator Nancy Skinner, and currently with the California Coastal Commission, Diana found the courage to vocalize her unique ideas and values amongst governmental professionals who looked nothing like her. Diana intends to earn her J.D before pursuing her ultimate career goal of serving the public at the federal level, either in Congress or the Environmental Protection Agency.

As a CHCI Intern, Diana hopes to continue growing under pressure in intellectually stimulating and challenging environments that will strengthen her fearlessness and courageous persona. She is confident that CHCI will serve as her gateway towards pursuing a career in congressional politics, where she will leverage her positionality as a tool to restore justice in America for the most vulnerable communities.