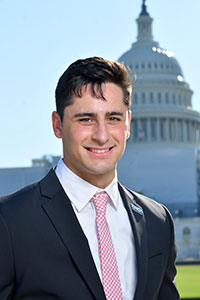 Elias Choclin attended Roger Williams University, where he graduated with a degree in International Relations and Foreign Language, as well as a minor in Political Science. While attending Roger Williams University, he was a part of the Men’s soccer program during his four years there. Elias was originally born in Buenos Aires, Argentina, and moved to New York with his parents when he was only a year old. Being raised by immigrant parents and being an immigrant himself, Elias takes pride in the roots that he grew up with and understands the difficulties that other migrants may face. Elias has been heavily involved in policy and legislation as he has interned in the past with the League of United Latin American Citizens as well as interning at both the House and Senate levels of the Hill. Elias hopes to one day be able to work within the federal government, specifically the Hill, and eventually move up to the Department of State or Defense as a Foreign Affairs advisor.

As a CHCI Intern, Elias hopes to gain more knowledge and experience in the working environment on the Hill so he can be prepared to the best of his abilities when he is given the position to create safety, peace, and prosperity for all Americans.