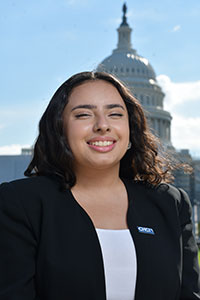 Ivette Sosa Barraza was born and raised in Mesa, Arizona by her two Mexican immigrant parents that migrated from a small town in Durango, Mexico. Ivette is the oldest of three and the first in her family to pursue higher education. She is currently a senior at Barrett, the Honors College at Arizona State University where she is pursuing a double major in Political Science and Transborder Studies with a concentration in immigration policy and a Spanish minor.

She has been a student activist in the immigration reform movement since she was 16 years old. Since her first year of college, she has helped spread Aliento’s, a non-profit immigrant-led organization, mission at ASU as one of the co-chairs, with the goal of connecting impacted students with resources and safe community space. As a student that comes from a mixed-status family, she hopes to inspire others to share their stories. Ivette’s passion is empowering others, and she hopes to one day continue expanding this passion as a U.S. Congresswoman.

As a CHCI Intern, Ivette hopes to strengthen her leadership skills and expand her understanding of the legislative process. Ivette plans to bring these skills back to her community and aid in the training of up-and-coming leaders. Her favorite quote is, “They tried to bury us, they didn’t know we were seeds,” a Mexican proverb, which is a metaphor where the oppressed, the seeds, grow stronger despite the attacks of the oppressor. It’s a statement on the importance of unity.