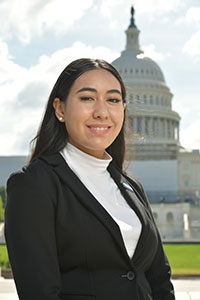 Joanna Peña Rodriguez was born and raised in Wenatchee, Washington where a significant Hispanic/Latinx population makes up the agricultural industry. Her parents immigrated to the United States from Jalisco, Mexico, 27 and 23 years ago. As a first-generation student, Joanna has consistently prioritized her education. Her commitment to her future and desire to serve her community is reflected in her accomplishments, involvement, and interests in and out of the classroom.

As a rising sophomore at the University of Washington, Joanna intends to double major in Law, Societies and Justice, and Political Science with a minor in Geography. After completing her undergraduate degree, she plans to take some time to gain experience working alongside her community and with grassroots organizations led by those who are experiencing injustice before going to law school. Ultimately, her career aspirations are to become an immigration defense lawyer and represent undocumented immigrants. At the UW, she is a part of the College Assistance Migrant Program (CAMP), Unidas Seremos, M.E.Ch.A, The Latinx Student Union, and Liberated Voices WA—a student organization that advocates for human rights and supports the voices of those detained. Additionally, she is working alongside the grassroots organization La Resistencia. Overall, she is passionate about advocating and standing in solidarity with marginalized communities.

As a CHCI Intern, Joanna hopes to make the most of this opportunity. She is looking forward to gaining insight into the legislative process, policymaking, and overall gaining first-hand experiences while representing her community.