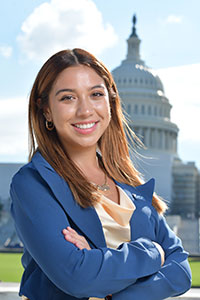 Marlenne Guadalupe Carrillo Gonzalez was raised in a rural mountain town called Truckee, California by her mother and father, both of whom immigrated from Mexico. Marlenne has always understood the importance of ‘echandole ganas’ in school because her parents and older siblings never had the opportunity to pursue higher education. Her father was deported in 2013, but she persevered and discovered community empowerment and community work to be an important part of her education and life.

Marlenne is currently a senior at San Diego State University, double majoring in Political Science and Chicana/o/x Studies. Throughout her educational career, Marlenne has focused her work within the Latinx community, this last year she worked at her university’s Latinx Resource Center as a mentor to first-generation Latinx freshman students. In addition, she has actively worked in the immigration field by volunteering for a group called Detention Resistance, which is made up of abolitionists who work to abolish Immigrant Detention Centers. Upon completing her undergraduate degree, Marlenne hopes to attend law school to become an immigration attorney. Her long-term professional ambition is to work as an attorney for a non-profit civil rights organization or to establish her own non-profit that assists all types of immigrants seeking legal aid in the United States.

As a CHCI Intern, Marlenne hopes to expand her knowledge of immigration politics and legislative procedures. She hopes to use this experience to empower herself in order to empower the Latinx community in the United States.