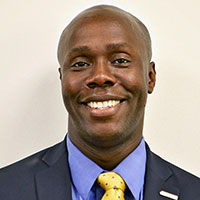 Ademola Oyefeso is an International Vice President and Director of the Legislative and Political Action Department at the United Food and Commercial Workers International Union (UFCW), the largest private sector union in the United States. In this role, he advances the union’s legislative priorities and works with elected officials and candidates at every level of government to support the issues that matter most to UFCW’s 1.3 million hard-working members and their families.

He also helped to pass New York City’s fresh food financing initiative, which brought grocery stores to underserved communities.
Prior to UFCW, Mr. Oyefeso was the Senior Director of Political Affairs and Strategic Initiatives at the Retail, Wholesale and Department Store Union (RWDSU). He also served as the Principal Director of the Outreach and Services Unit for the Speaker’s Office of the New York City Council.

He graduated from the State University of New York College at New Paltz with a Bachelor of Science in Political Science and a Chemistry minor. Mr. Oyefeso lives in Brooklyn, NY with his wife and two children.