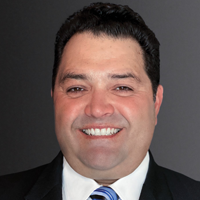 Mr. Candelaria is the first-generation son of Mexican immigrants who instilled within him the value of a quality public education. As a result, Mr. Candelaria learned firsthand about the transformative power of public education, how the influence of one educator knows no limits, and that when woven together the two form a direct pathway toward the American Dream.
Elected amid the COVID-19 pandemic and the economic crisis that it created, Mr. Candelaria is the former president of the Texas State Teachers Association (TSTA). Before that, Mr. Candelaria served three years as TSTA vice president, which followed a distinguished tenure as president of the Ysleta Teachers Association (YTA) in El Paso, Texas, where he worked in the Ysleta Independent School District (YISD), teaching subjects ranging from Algebra to World History.

Mr. Candelaria has also held leadership positions at the National Council of State Education Associations, NEA Member Benefits and the National Teacher Hall of Fame (NTHF). During Mr. Candelaria’s leadership as chair of the Memorial to Fallen Educators, located in Emporia, Kansas, legislation was passed to designate the monument as a national memorial site. Mr. Candelaria has also served on numerous national committees and task forces, including the NEA Human and Civil Rights Committee.
A tireless advocate for educators and students—who is often joined in his activist work by his wife Patty, a National Board Certified Teacher—Mr. Candelaria believes in the value and power of relationships that are based on trust, whether they are formed in the classroom, the community or the halls of political power. Mr. Candelaria relies on those relationships—at the local, state, and national levels—to keep the doors of success open and accessible to all students.

Mr. Candelaria is a dynamic and energetic speaker who is frequently asked to speak about racial and social justice, classroom management, and creating high-quality Association leaders. He holds a bachelor’s degree in interdisciplinary studies and education from the University of Texas at El Paso.