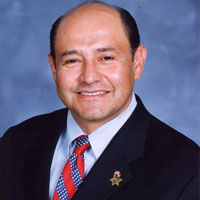 Rep. Correa is a longtime Orange County resident with deep local roots. To this day, he lives only three miles from his childhood neighborhood. The Congressman is the son of working class parents whose hard work gave him a chance at success. He has spent his career fighting to protect the American Dream and to ensure that anyone can reach the middle class, just as he did.

Lou lives in Santa Ana with his wife of 25 years and their five children. He can be found at community events every weekend.