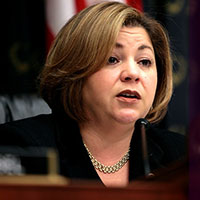 Rep. Sánchez is proud to serve as Vice Chair of the House Democratic Caucus, the fifth-highest ranking position in House Democratic Leadership. In this leadership position, she is focused on strengthening the American Dream for men and women all across the country. Rep. Sánchez is the first Latina elected to a leadership position in the U.S. Congress, and the highest-ranking Latino in the House of Representatives.

The sixth of seven children, Rep. Sánchez was born in Orange, CA to immigrant parents from Mexico. She attended the University of California, Berkeley, where she earned a Bachelor of Arts in Spanish Literature with an emphasis in Bilingual Education. After working as a bilingual aide and ESL instructor to pay for school, she earned her law degree from the University of California, Los Angeles.

After law school, Rep. Sánchez worked in a private practice before going to work for the International Brotherhood of Electrical Workers (IBEW) Local 441 and the National Electrical Contractors Association (NECA). Prior to coming to Congress, Rep. Sánchez served as the Executive Secretary-Treasurer for the Orange County Central Labor Council, AFL-CIO. Rep. Sánchez is still an active and card-carrying member of IBEW Local 441.

Rep. Sánchez serves on the powerful and prestigious House Committee on Ways and Means. Ways and Means is the chief tax-writing committee in Congress and also plays a critical role in federal legislation on trade, Social Security, and Medicare. As a member of the Ways and Means Committee, Rep. Sánchez is a steadfast advocate for protecting seniors’ Social Security and Medicare, ensuring U.S. workers and their employers get a fair deal in trade agreements, and reforming the tax code to create an even playing field for the middle class.

Prior to the 115th Congress, Rep. Sánchez served in a number of leadership positions. From 2011-2017, she served as Ranking Member on the House Ethics Committee. From May 2014 to December 2016, she served on the Select Committee on Benghazi. In the 114th Congress (2015-2017), Rep. Sánchez served as the Chair for the Congressional Hispanic Caucus (CHC), a 26-member organization dedicated to advocating for the important issues affecting our nation’s growing Hispanic and Latino community.

Rep. Sánchez has served in the United States House of Representatives since 2003 and currently represents California’s 38th Congressional District. She is dedicated to reducing crime in our communities, making schools safe for all children, providing quality education and affordable health care, and cleaning up the air and water in Southern California.

Rep. Sánchez and her husband, James Sullivan, are the proud parents of Joaquín Sánchez Sullivan, and his Sullivan brothers: Brendan, Jack, and Seamus. Back home in California, the lifelong LA Dodgers fan enjoys taking the family’s miniature Schnauzers, Brooklyn and Scully, on walks along Whittier’s greenway trail and on hikes up to the Turnbull Canyon water tower.