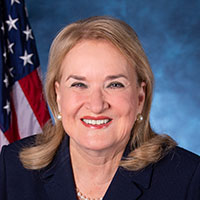 Sylvia R. Garcia was elected to the U.S. House of Representatives in November 2018, becoming the first Latina ever to represent Texas 29th Congressional district.

Congresswoman Garcia continued her public service career by serving as Presiding Judge of the Houston Municipal System for an unprecedented five terms under two mayors. In 1998, she was elected City Controller, the second highest elected official in Houston city government and its chief financial officer. She quickly earned a reputation as the taxpayers’ watchdog, fighting to protect the pocketbooks of working families and ensuring the City was transparent and accountable.

After two terms as Controller, Congresswoman Garcia was elected to the Harris County Commissioner’s Court. The first Hispanic and first woman to be elected in her own right to the office, she continued her advocacy for working families and made certain Harris County took care of its most defenseless, all while making certain Harris County led the way for new jobs and economic development.

Congresswoman Garcia was sworn in to the Texas State Senate on March 11, 2013, representing Senate District 6. She became the seventh woman and the third Hispanic woman to serve in the upper chambers after winning a special runoff election for the seat of the late Senator Mario Gallegos.

In 2018, Congresswoman Garcia decided to take her fight to Washington. She ran to represent her community, country and family in Congress. On Jan 3, 2019 she was inaugurated to represent Texas Congressional District 29. She became the first Hispanic member of the Houston Congressional Delegation and one of the first two Latinas to represent the State of Texas in the U.S. Congress.

Congresswoman Garcia serves on the House Judiciary and House Financial Services Committees. During her first year in Congress, she played a critical role in the impeachment investigation against President Donald Trump. On January 15, 2020, she was selected as one of seven impeachment managers tasked with making the case to the American people and the Senate for the removal of Donald Trump as President of the United States. She is the first Hispanic and one of the first three women to ever serve as impeachment manager for a presidential impeachment trial.