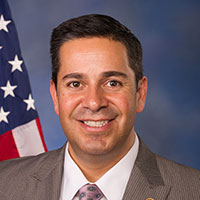 Congressman Ben Ray Luján grew up in Nambé, a small farming community north of Santa Fe, bordered by the Nambé and Pojoaque Pueblos. It was there that he learned the values of New Mexico from his family and community; including the importance of hard work, dedication, and perseverance.

He currently serves as the Assistant Speaker in the 116th Congress and is the highest-ranking Hispanic in Congress.

Since being elected in 2008, Sen. Luján has championed efforts to create good-paying, green jobs in New Mexico, expand quality health care and protect patients with pre-existing conditions, preserve our natural resources and sacred sites, build a clean energy economy, and uplift the middle-class. He is a member of the House Energy and Commerce Committee, sitting on the Health Subcommittee, Consumer Protection and Commerce Subcommittee, and the Communications and Technology Subcommittee.

Sen. Luján has focused on spurring local economic growth through a number of legislative initiatives. His bill to make it easier for local entrepreneurs to bring their ideas to the marketplace was signed into law. He has also written legislation that would leverage New Mexico’s labs to drive job creation while addressing tomorrow’s energy challenges.

Recognizing that action on the climate crisis cannot wait another generation, Sen. Luján has been a leading voice in the fight against climate change. In addition to supporting the Green New Deal, Sen. Luján has developed bold, comprehensive legislation to put the United States on a path to net-zero carbon emissions to combat the climate crisis and grow the economy. This visionary plan has earned praise from climate experts, environmental advocates, and labor groups.

He has also been a fierce advocate for environmental protection in New Mexico. Sen. Luján was part of an effort during the Obama administration to establish national monument designations for the Rio Grande del Norte National Conservation Area and the Organ Mountains-Desert Peaks, preserving some of New Mexico’s greatest treasures and tourism drivers. He also helped lead the effort to put people over polluters and protect the greater Chaco Canyon region from harmful oil and gas drilling and dangerous methane emissions.

Throughout his time in Congress, Sen. Luján has fought to increase New Mexicans’ access to quality health care, no matter where they live or how much money they make. He has had legislation signed into law to bolster the Children’s Health Insurance Program, strengthen Medicaid and Medicare, and secured millions in funding to combat opioid crisis for New Mexico. He has also secured behavioral health care funding for expanded prevention, treatment, and recovery services in New Mexico and across the country.

Sen. Luján has been a champion for New Mexico working families, including advocating to raise the minimum wage, close the gender pay gap, and bridge the digital divide for rural communities. He has been an unwavering supporter of women’s rights, LGBTQ+ rights, and continues to advance causes important to New Mexico families.

Sen. Luján represents his diverse district by participating in a variety of Caucuses, including the Congressional Hispanic Caucus and the Native American Caucus. He serves as co-chair of the bipartisan National Labs Caucus and the Congressional Cleanup Caucus. Sen. Luján is a founding member of the Tech Transfer Caucus, which works to move technological innovations from New Mexico’s national labs and universities into the marketplace.

In 2013, Sen. Luján was appointed to the House Democratic Leadership as a Chief Deputy Whip. In the 114th Congress, Sen. Luján served as Chair of the Democratic Congressional Campaign Committee and was elected by his colleagues to again serve in this role for the 115th Congress.

Prior to his election to the U.S. House of Representatives, Sen. Luján served as the Chairman of the New Mexico Public Regulation Commission. As a Commissioner, he worked with his colleagues to develop a renewable portfolio standard to increase clean energy production by New Mexico utilities. He also advocated for first responders, working to overhaul the New Mexico Fire Fund so that all distributions from the fund would go to improving fire services in New Mexico.

Prior to his service on the Public Regulation Commission, Sen. Luján was the New Mexico Cultural Affairs Department’s director of administrative services and chief financial officer.