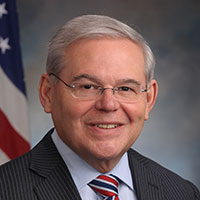 Sen. Bob Menéndez’ story is a quintessential American story. He grew up the son of Cuban immigrants in a tenement building in Union City and has risen to become one of 100 United States Senators. He served as Chairman of the Senate Foreign Relations Committee in the 113th Congress. The Committee is one of the oldest and most revered Committees in the Senate, at a time when world affairs has a dramatic impact on our economy at home. He has earned a national reputation for his international leadership in the Senate, which pairs with his long-time reputation as a fighter for New Jersey families who puts their economic security ahead of powerful special interests.

A product of New Jersey’s public schools and a graduate of the state’s universities, Sen. Menéndez learned early on the importance of standing up for what’s right, no matter how powerful the opposition. He first entered public service as a 19-year-old college student when his high school would not provide books to students who could not afford them. Sen. Menéndez launched a successful petition drive to reform the local school board and a year later won a seat on that very board. He stood up to corruption in Union City and went on to become its mayor, a state legislator and was elected to Congress in 1992. He quickly rose to leadership positions and has given New Jerseyans a seat at the table during critical negotiations on every issue since then: war and peace, jobs and the economy, education, health care, veterans issues, world affairs, transportation and housing.

Sen. Menéndez career has been a tribute to his desire to protect the powerless from the powerful and ensure fairness for every American. He led the fight in Congress to make sure New Jersey received its fair share of recovery funds to help communities rebuild after Superstorm Sandy, chaired Senate Banking Committee hearings to hold the administration accountable for getting relief resources out of Washington, and passed landmark bipartisan legislation providing relief to homeowners hit with unreasonably high flood insurance premiums.

The son of immigrants, Sen. Menéndez understands the importance of New Jersey’s Liberty State Park, in the shadow of Ellis Island and the Statue of Liberty, at the gateway for millions of immigrants who came to this nation seeking the American Dream and a better life for them and their children. That’s why he was one of eight Senators who wrote and fought for comprehensive immigration reform legislation that passed the Senate in 2013 with an overwhelming bipartisan show of support.

While Chairman of the Senate Foreign Relations Committee, he established himself as a new foreign policy leader for a new century, seeking to do globally what he has done in New Jersey – supporting the most vulnerable in our society and lending a voice to those least able to speak for themselves. He has advocated for women and children struggling with oppressive poverty in Central America and Africa, and stood by democracy activists struggling to reform governments from Cuba to China to Russia. In addition, he has evoked a strong national security posture in the face of tyrannical leaders of Russia, Iran and Syria. He has led the Foreign Relations Committee in bipartisan efforts, reaching across the aisle in September 2013 to unanimously pass a resolution to allow the President to use military force in Syria, which led to the end of the use of chemical weapons against civilians. Sen. Menéndez uses economic statecraft to realize the nexus between economic issues and foreign policy to allow America – and New Jersey – to prosper in our intertwined global economy.

Sen. Menéndez has been widely recognized for his leadership on promoting safe and healthy families. He has championed legislation to support mothers suffering from postpartum depression, help families meet the challenges of autism, and keep young athletes safe from harm on the playing field. He serves on the Banking, Housing and Urban Affairs Committee and has championed increased consumer protection and corporate accountability, fairness in lending, affordable housing, and comprehensive approaches to community revitalization. He served as Chairman of the Banking Subcommittee on Housing, Transportation and Community Development where he fought for smart growth, jobs for the 21st Century and updating our aging transportation system. As a member of the Finance Committee, he has sponsored legislation increasing access to health care, advocated for fairness in the tax code to help middle class families get college educations and be able to retire, and Bob has pushed for trade initiatives to ensure America’s global competitiveness.

Sen. Menéndez received his B.A. from St. Peter’s College in Jersey City and his law degree from Rutgers University. He currently lives in Paramus and has two children, Alicia and Robert.