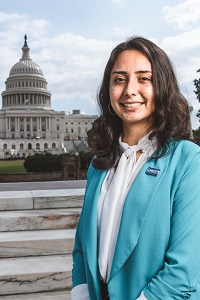 Andreina Barajas Novoa was born in New Rochelle, New York, and raised in Stratford, Connecticut. Her parents immigrated to the United States from Jalisco, Mexico in search of new beginnings. Andreina’s father works in construction and his career prompted her to pursue a career in Heating, Ventilation, and Air Conditioning (HVAC) while in high school. Andreina’s four years of studying HVAC in high school influenced her desire to pursue a legal career where she can protect working-class people and help ensure their equal treatment under the law.

Andreina is a sophomore Honors College student at Southern Connecticut State University pursuing a double major in Sociology and Political Science and a minor in History. Andreina is part of Student Government, is the student voice on the Diversity, Equity, and Inclusion Council, and works on campus as a Diversity Peer Educator. She was awarded the Student Affairs Outstanding First-Year Student Award for her commitment and success in the areas of scholarship, leadership, and service at Southern.

Off-campus, Andreina is a member of Connecticut Students for A Dream where she has been actively helping on the HUSKY for Immigrants campaign. Andreina is passionate about helping the undocumented community and hopes to pursue a legal career where she can protect the rights of undocumented construction workers who are often abused by their employers.

As a CHCI Intern, Andreina hopes to build on her understanding of the legislative process so she can learn new ways to make progressive social change in her campus community and the state of Connecticut.