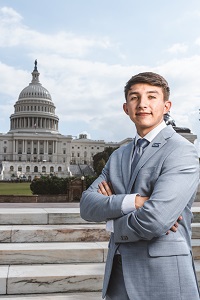 Julian was born in Zamora, Mexico, and was brought to the United States at 6 months old. He was raised in Rupert, Idaho where he was the first person in his family to complete high school. Also, as a first-generation college student, Julian’s main goals are to engage with underserved youth and show them that it is possible to reach for their dreams.

Julian is currently a senior at Boise State University studying Political Science with an emphasis in American Government and Public Policy, as well as a minor in Spanish. Upon completing his undergraduate degree, Julian hopes to obtain a master’s degree in American Government and hopefully work on Capitol Hill simultaneously. Julian’s ultimate career goal would be to become a U.S. Representative for the state of Idaho.

As a CHCI Intern, Julian hopes to explore how government advocacy can help create better socio-economic policies that help everyone. Julian believes that CHCI will also provide him with a great opportunity to continue to inspire youth in his community.