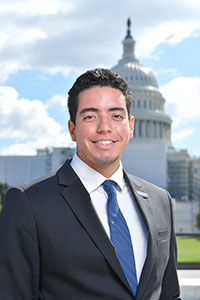 Andres Rene Gomez (he/him) was born and raised by immigrant parents in Los Angeles, California. His parent’s stories of leaving their home countries of Mexico and El Salvador helped him understand the sacrifices that allowed for the privilege he was born into and motivated him to make the most of every opportunity. Raised throughout the suburbs of Los Angeles County and attending school as a racial minority, Andres struggled with embracing his Latino identities. That is, until he found Chicano Studies, which allowed him a newfound perspective and racial consciousness to confront the world and better understand himself.

Andres attended East Los Angeles College before transferring to the University of California, Berkeley after just one year. He graduated with a bachelor’s degree in Political Science with an emphasis on United States politics. What stood out most to him during his university experience was the lack of Latine representation in faculty and students. Equipped with a better understanding of systemic barriers that bar Latinos from higher education, Andres returned to work for his community college with just one thing in mind – equity. Andres has also worked to combat underrepresentation in media as the editor-in-chief of a publication for BIPOC artists and through content creation circulated through social media.

As the CHCI-Altria Public Policy Fellow, Andres hopes to gain more insight into the inner-workings of the legislative process, as well as make meaningful connections with people across the political spectrum. He hopes to bring his experiences of living in a metropolis to make a positive change in people’s lives.