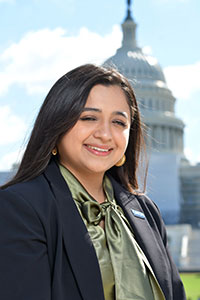 Karina Llanes (she/her) was born and raised in Caldwell, Idaho. Her mother instilled in her the importance of education when she began teaching her to read in Spanish at age four. Growing up in a largely Mexican community in a predominantly white state, she watched as her community was left at the mercy of systems full of inequity. She heard stories from loved ones about the hardships of being Latinx in the U.S. She’d listen to her father talk about his childhood in the mountains of Guerrero, Mexico, stories from a time his feet weren’t swollen from twelve-hour shifts at the factory. As she got older, she realized how effective storytelling is in pursuit of change.

As the eldest daughter in a low-income immigrant household, it was difficult to imagine how she’d ever become a journalist, a dream born from her cultural inheritance. But with the help of mentors and the encouragement of family, she graduated with a B.A. in Creative Writing from the College of Idaho. She also minored in Journalism, Latin American Studies, and Human Biology. Karina was involved in her campus community, especially in areas that she believed would positively impact students. She was a staff writer for the school newspaper, and one of her pieces was featured in the college’s alumni magazine. She was a collaborative researcher on campus and presented at the West Region Society for Community Research and Action conference. Karina was an intern at the Boise State Public Radio, where she covered stories about cultural events, community organization efforts, and COVID-19 updates. She was one of four researchers chosen for a pilot program to conduct an ethnographic research study on affordable housing in Caldwell.

As a CHCI-Google Public Policy Fellow, Karina is eager to learn more about public policy and how to help the stories of historically oppressed communities in the U.S. influence stakeholders.