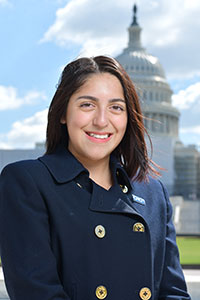 Madeline Kleinschmidt (she/her) grew up in Alaska and studied international business at West Texas A&M University. From a young age, Madeline was exposed to an international perspective of the world, given her Venezuelan and German heritage. Her interest in international affairs was further developed through her travels within the United States, as she learned of the great cultural diversity making up America. Venezuela’s economic and political situation greatly affected Madeline’s family and drove her to pursue a career in international affairs, where she seeks to uphold democracy, human rights, and security.

In addition to graduating with honors, Madeline also held leadership roles, worked in several internships, and conducted graduate-level research throughout her undergraduate career. Madeline served as the President of her Enactus student chapter, which sought to utilize business innovation to help meet the United Nation’s 17 Sustainable Development Goals and aid the local community. As a member of the United States Foreign Service Internship Program, Madeline has worked for the State Department in the Bureau of Populations, Refugees, and Migration, where she helped with the distribution process of $29 million in humanitarian assistance funds towards the Venezuelan crisis. She also worked in the Public Affairs Office for the U.S. Embassy in Colombo, Sri Lanka, where she managed social media and utilized public media platforms to dispel disinformation and help clarify U.S. policy goals. In addition, Madeline has volunteered as an ESL teacher to adult refugees in her community and served as the U.S. Cultural Orientation intern, facilitating youth mentorship programs for underserved age groups of refugees. As a McNair Scholar, Madeline conducted research on transitional justice mechanisms and the ways countries rebuild after severe human rights abuses, presenting her findings at various national conferences.

As a CHCI Public Policy Fellow, Madeline plans to utilize her business background and leadership skills to be involved in the development of policies that support the role of small businesses in building economic growth, as well as international policies which sustain democracy abroad and protect Americans at home.