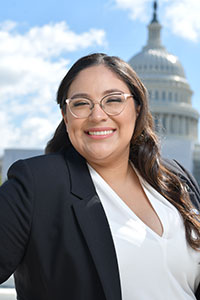 Angelica Espinoza (she/her/ella) was born and raised in San Diego, California. Her upbringing in a border town and as a child of Mexican immigrants instilled in her the importance of advocating for the most marginalized in her community and using her platform to uplift others. As a first-generation college graduate from San Diego State University, she earned a Bachelor of Arts in International Security and Conflict Resolution and a Master of Science in Homeland Security.
While on campus, she held numerous leadership positions that allowed her to see firsthand how education policy could improve the livelihood and success of students, especially those from underrepresented backgrounds. Elected by the student body, Angelica became the first Latina in over 15 years to serve as the Associated Students Vice President of External Relations. In that role, she promoted civic engagement on campus and led all advocacy efforts on behalf of SDSU students. Her success in organizing and advocating for the students on her campus led to her appointment on the Board of Directors for the California State Student Association, representing over half a million students enrolled in the California State University system. There, she worked alongside the California State Legislature and California State University Board of Trustees on improving student success outcomes by introducing new campus-wide initiatives and collaborating on education legislation with elected officials. She then served as the youngest council member on the College Area Community Council and Community Planning Board.
During her graduate studies, Angelica became the inaugural San Diego Fellow for IGNITE National, a nonprofit organization dedicated to empowering women to become civically engaged. Through this organization, Angelica hosted events for women in college about civic engagement, voter rights, and gender equality. Most recently, the Mundt Peacemakers Fund selected her as a Mundt Peace Fellow to take part in international humanitarian and peace efforts. With the support of the Mundt Peacemakers Fund, Angelica worked with the Red Cross as a Disaster Duty Officer, where she coordinated responses to emergencies alongside local, state, and federal stakeholders while providing trauma-informed care to clients recovering from disasters. The accumulation of her professional experiences, community leadership, and academic achievement resulted in her being awarded the title of Woman of the 39th District by California Senate President Pro Tempore Toni Atkins.
As the CHCI-Walton Family Foundation Education Graduate Fellow, Angelica is eager to resolve preexisting and emerging issues in our educational institutions. She also hopes to create an empowering environment where all people can discover their unique ways to be civically engaged and learn how to use political institutions and their own narratives as a vehicle for change.