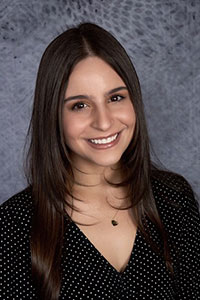 Gabriela “Gabi” Garcia was born in Miami, Florida, and is the granddaughter of Cuban exiles. Having been raised in South Florida, Gabi has had the unique experience of living in a majority-minority city that has been fueled by waves of immigration from the Caribbean and Latin America. Because of this upbringing, the issue of immigration has always been of great importance to her. Gabi graduated, cum laude, from Barnard College, Columbia University, with a B.A. in American Studies with a Transnational Studies concentration. Gabi served in student government all four years and was elected as president of her junior and senior year class. She completed her senior thesis on the 2000 international custody case of Elián González. Her research examined the history of the U.S.-Cuba relationship in the case’s legal proceedings. Gabi was able to visit Cuba in 2015, when the American flag was raised for the first time in over 50 years at the reopening of the U.S. embassy in Havana, ushering in a new era in relations between the two countries.

Over the course of her college career, Gabi has worked at several public sector offices, primarily in advocacy roles. She interned at the Miami-Dade State Attorney’s Office, where she was assigned to the Major Crimes Unit. She later worked for the New York Attorney General’s Office, working with the Bureau of Internet & Technology, and mediated cases for NYC residents who had been victimized by data breaches and online frauds. As a Spanish-speaker, she was assigned cases with residents who had experienced cybersecurity issues and saw firsthand the lack of resources available to some of the city’s most vulnerable communities. Last year, Gabi was accepted to a small cohort of students who traveled to a detention center for women and children in Dilley, Texas. There, she helped the women prepare their asylum cases.

As a CHCI fellow, Gabi hopes to bring her leadership skills, understanding of societal inequalities, and public service commitment to her placement office.