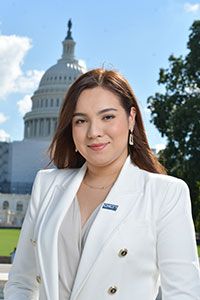 Citlalli Ortiz (she/her) was born in Guadalajara, Jalisco, Mexico, she immigrated to the United States with her parents at two years old and was raised in Long Beach, California. Owing to the motivation and support of her family, Citlalli became the first person in her family to graduate college. As a daughter of immigrants and a DACA- recipient, she has been affected by the broken immigration system. Due to this Citlalli has been an advocate in her community where she’s been involved in activism to support an all-inclusive reform that provides a pathway to citizenship for all 11 million undocumented people residing in the United States.

Citlalli graduated from California State University, Long Beach with a Bachelor of Arts in Communication Studies and a minor in Public Relations. Throughout her undergrad career Citlalli was heavily involved with student organizations and student government in support of  underrepresented students and communities. Within her role as the Dreamers Study Abroad Manager for the California-Mexico Studies Center she helped execute and manage eight summer study abroad programs specifically designed for DACA recipients, a groundbreaking initiative and the first in the country. The program hosted a total of 300 participants from June to August 2021 and from June to July 2022. During the Trump presidency and due to the threats immigrants were facing she was a key organizer for three advocacy trips to Washington D.C. where she led training, meetings with legislators, social media content, and pre-planning. Throughout this role, she served as the organization’s spokesperson for immigration-related issues with Spanish and other media. During her undergraduate career, Citlalli served in various roles in student government, including Chief Diversity Officer. In this role, she was the chief advisor and senior policy maker on diversity and social-justice-related matters to the Associated Students Inc. President. As senator-at-large, Citlalli authored a policy resolution urging CSULB to commit to recruiting, hiring, retaining, and supporting Latinx faculty in proportion to the student demographics of CSULB. Throughout her undergraduate career, she promoted state legislation granting in-state tuition for undocumented students through meetings with university administrators and legislation in collaboration with the Student Organization for Undocumented Students.

As the CHCI-Meta Public Policy Fellow, she hopes to better understand the legislative process and develop policy that will create a bigger impact for our immigrant community.