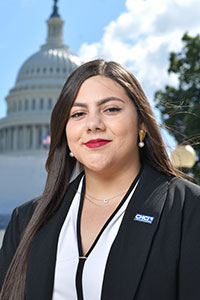 Daribel Román (she/her) was born and raised in Bayamón, Puerto Rico. As the youngest and only daughter of five siblings and two exceptionally loving parents, her family shaped her aspirations and perspective of life. Growing up in “La Isla del Encanto” meant constantly facing challenges and uncertainty. From suffering the hardships of hurricanes Irma and María to facing the struggles of the earthquakes that struck the Island. Nonetheless, Daribel saw these obstacles as stepping stones to achieve a brighter future not only for her but for her community.

Daribel obtained a B.A. in Political Science with a concentration in International Relations and Government, Rule of Law, and Public Policy from the University of Puerto Rico, Río Piedras Campus. As part of the Córdova & Fernós Internship, one of Puerto Rico’s top internship programs, Daribel served as a Government Affairs Intern for the Puerto Rico Federal Affairs Administration in Washington, D.C. In this role, she discovered her passion for public policy. She had the privilege to work on issues addressing the inequalities that citizens on the Island face due to their colonial status. After this experience, she returned home with an eagerness to keep helping her Puerto Rican brothers and sisters and began interning for a State Representative in Puerto Rico.

As a Global Leader for the Congressional Hispanic Leadership Institute, Daribel experienced how the public and private sectors shape public policy. As an intern for Congressman Cuellar, she learned firsthand how policymaking at a federal level impacts the lives of those in a border district on a variety of issues, from trade to immigration. Subsequently, she continued the program as a Legislative Assistant at UPS’s Global Public Affairs division, where she gained a comprehensive perspective of how the private and public sectors intertwined, sharpened her critical thinking on strategically addressing policies, and focused on how trade impacted minorities such as women in Latin America.

As the CHCI-Amazon Social Equity Public Policy Fellow, Daribel hopes to continue acquiring experience in foreign policy and working to address global issues, and to promote Latina representation in diplomacy and the highest spheres of policymaking.