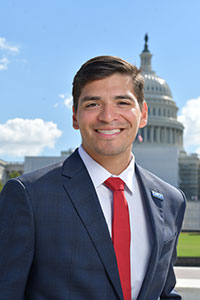 David Ruedas (he/him) was born in El Monte, California, and was raised in Ripley, Mississippi. He is the son of Mexican immigrants and is the second youngest of four brothers. His father worked tirelessly in upholstery for a furniture company to ensure that the family had all of their needs met. He taught his children strong values such as: work ethic, respect for others, and humility. The sacrifices of his parents enabled David to further his education and become the first Attorney in his family.

David graduated from Ole Miss in 2017 earning a bachelor’s in criminal justice, with an emphasis in Homeland Security, and then from Ole Miss Law in 2020. While in law school, he was one of the founding members and served as the first president of the Latin Law Student Association at the University of Mississippi School of Law. He also had the opportunity to assist the Director of the MacArthur Justice Clinic in its response to the ICE raids of 2019 in Canton, Mississippi.

After graduating, David worked as an Associate Attorney for Akins & Adams, P.A. Under the supervision of his long-time Mentor, Sean Akins, David had the opportunity to work on a variety of cases as a Plaintiff’s attorney. He focused on family, property, and contract disputes. David credits his mentor for teaching him how to become an advocate in the courtroom. In 2021, David accepted the position of Immigration Attorney with Northern Virginia Family Service. In that role, David represented clients before the Executive Office of Immigration Review and the United States Citizenship and Immigration Services.

As the CHCI-Wells Fargo Housing Graduate Fellow, David hopes to improve his problem-solving, analytical, and leadership skills. Furthermore, he seeks to gain a better understanding of how ideas are debated, compromised, and become legislation.