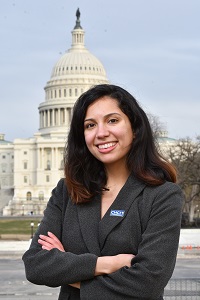 Born and raised in Northern Virginia but with roots in Colombia and Ecuador, Diana Sosa is an agent for social change and cultural exchange. Diana is a proud first-generation senior at Georgetown University majoring in Latin American studies and International Development. During her time in college, Diana founded a campus empowerment group for Latinas, led peer dialogues on diversity, served as a campus tour guide, and tutored English Language Learners. An avid traveler, Diana has studied abroad in Spain, Argentina, Cambodia, Cuba, and Ecuador. This summer, Diana split her time between interning at the Department of State in the Office of Central American Affairs and conducting research through an undergraduate grant to analyze the experiences and conditions of immigrant domestic workers. Diana’s passion for social justice, interest in world cultures, and love for meeting new people have inspired her career goal of becoming a U.S. Foreign Service Officer.

As a CHCI intern, Diana hopes to learn more about the intersection of foreign policy and domestic issues and gain a deeper understanding of the critical role of the legislative branch and all its functions on Capitol Hill. With this knowledge, Diana hopes to become an informed leader championing for the Latino community throughout her career.