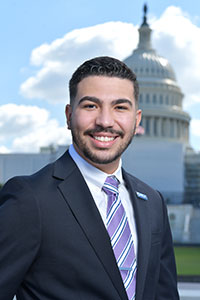 Fabian Isaiah Valentin (he/him/his) was born in Hoboken, New Jersey. A product of the Puerto Rican diaspora, he grew up in a working-class neighborhood in Orlando, Florida. As the son of a truck driver and a paralegal for the local school district, Fabian learned the importance of hard work, community service, and learning about family history. He enjoyed reading about Latin American history and economic justice.

Fabian graduated from Florida State University with a Bachelor of Science in International Affairs with an emphasis on economics and public administration. He was awarded fellowships at the Institute of Politics at Florida State University and the Social Science Scholars Program. As an undergraduate, Fabian interned for Florida State Representative Anna Eskamani, where he worked on processing unemployment benefits in response to the economic crisis induced by the pandemic. At the Office of the General Counsel of the Central Florida Expressway Authority, Fabian researched and compared the policies of seven partner jurisdictions. He also became a policy analyst and, later, the director of policy research for Florida’s first student-run think tank. At a local human rights and criminal defense law firm, Fabian prepared pleadings to help zealously advocate for indigent clients. Fabian completed his studies with an honors thesis analyzing the socioeconomic impact of Puerto Rico’s political relationship with the United States in the case of Hurricane Maria. After graduation, Fabian became an AmeriCorps VISTA at the City of Orlando Office of the Mayor, where he saw first-hand the symptoms of inequitable economic growth and underinvestment in communities of color while collaborating with service providers to resolve homelessness.

As a CHCI-Amazon Public Policy Fellow, Fabian aims to explore his passion for public service while gaining a more profound understanding of the legislative process and public policy to become a change-agent in the Latino community.