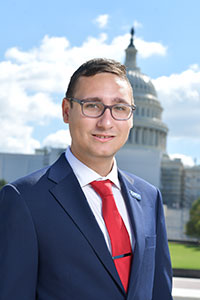 Geornalier Marcial (he/him) was born in Manatí, Puerto Rico but came to Kissimmee, Florida with his family when he was four years old in search of a better life. Despite this, he would go to Puerto Rico to visit family often, where he was taught that through hard work and education he could “Abrir las puertas del mundo”, open the doors of the world.

Geornalier graduated from Florida International University, a Hispanic serving institution, with a B.A. in Political Science and a minor in International Relations. During this time, he participated in various clubs such as College Republicans, Shalom and Hillel. Seeing a rise of anti-Israel sentiment in America led him to become a co-founder of Panthers for Israel where he served as AIPAC Campus Liaison. In this role, Geornalier was able to help connect the Jewish community to the Latino community, spearheading the building of coalitions between Latino Democrats and Republicans, and training them to become pro-Israel advocates. He also lobbied members of Congress to encourage the passing of the Strengthening America’s Security in the Middle East Act of 2019. Geornalier’s leadership skills led him to become a recipient of the Milstein Family Foundation’s Campus Allies Mission where he was invited to Israel to connect with other pro-Israel student leaders from all over the country and explore the many dynamics affecting the region. After graduation, Geornalier joined Vanguard Field Strategies, where he worked with several conservative campaigns in more than ten states, including the Glenn Youngkin campaign, where he served an integral role as a regional field director that managed 60 field staff to ensure victorious outcomes, including 500,000 doors knocked in Virginia. Geornalier also served as an International Director abroad for his company helping the Antigua and Barbadian government conduct a survey on the political opinions held by Antiguan citizens.

As the CHCI-ConocoPhillips Public Policy Fellow, Geornalier hopes to gain further insight into how grassroot campaigns translate over to public policy on the federal level. He also hopes to gain the skills necessary to form bi-partisan coalitions to help build a much stronger Latino Community.