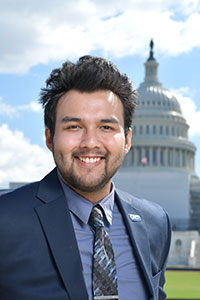 José Pablo Rojas (he/him) is a first-generation Mexican American, born and raised by the U.S.-Mexican border of Brownsville, Texas-; where he witnessed the mixture of his culture and national identity. He is the proud and youngest son of Mexican Immigrants and a first-generation college graduate. His and his family’s experiences with the U.S. healthcare system prompts Rojas to aspire to become a Physician and intertwine his interest in Politics and Health Care to ensure access to medical attention, particularly for marginalized communities of color and LGBTQIA+ individuals.

During his time at University of Texas, Rojas was involved in various forms of advocacy for LGBTQIA+ individuals and worked in a collaborative effort with Vice Media and Texas Rising, a product of the Texas Freedom Network, to shed light on the experiences of growing up in one of the most economically impacted regions in the nation. Rojas has also collaborated with the Valley Aids Council to spread Awareness of the HIV/AIDS Virus, which disproportionately affects communities of color. Knowing the lack of Latinx people in positions of leadership, Rojas evoked many outlets for representation on his university campus through the Student Government Association. During his tenure in Student Government, Rojas created a Diversity & Inclusion Task Force, geared as a platform for inclusivity of POC and LGBTQIA+ communities, collaborated in developing an environmental awareness program and community service programs while serving on University Health committees and holding administrative-student collaborative roles. José Pablo also served as the Student Body President who led a university-wide Referendum and Constitutional Convention, was the Texas Rising Chapter President and a Texas Civic Ambassador where he registered people to vote and learn how to be politically engaged.

As a CHCI-PepsiCo Health Public Policy Fellow, José Pablo looks forward to gaining the knowledge and skills that would aid him in addressing the disproportionate effects of the U.S. health care system on POC and LGBTQIA+ communities. He hopes to continue advocating for better access to care- knowing that he too endured hardships that have economically impacted both his family and his community in the Rio Grande Valley.