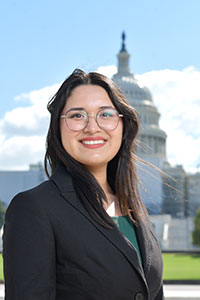 Kathya Xiomara Meza (she/her) was born and raised in Phoenix, Arizona. She is the proud daughter of Mexican immigrants, the youngest of four daughters, and a first-generation college graduate. Her parents instilled in her the importance of hard work, leading by example, and education by encouraging her to pursue bigger dreams at every corner. Growing up attending smaller underfunded schools with a large Hispanic population allowed her to both grow to appreciate her culture and view the inequity that immigrants and first-generation Mexican Americans face in all aspects.

Despite her experiences attending underfunded and under-served schools, Kat’s pursuit of education never wavered. She majored in Biomedical Engineering with a focus on Biocomputing at Marquette University in Milwaukee, Wisconsin. Kat became involved in research with a professor focusing on tissue regeneration and was a member of organizations like the Society of Women Engineers (SWE) and Engineers Without Borders (EWB). Kathya took on leadership positions, expanding her engineering perspective. Going beyond the interests of a “typical engineer,” she led clubs on campus like Mock Trial and BridgeUSA, a nonpartisan discussion-based politics club that encouraged communication about controversial topics between all parties to further understanding and collaboration.

Growing up, experiencing the inequities of the healthcare system and the barriers to obtaining access to care, Kat became very well versed in the world of insurance and accessibility to medicine at a relatively early age. Because of these experiences and the interest in making care more accessible to underserved and underinsured communities, Kathya is interested in health-based policy work.
As a CHCI-BP Public Policy Fellow, she plans to learn more about the policy-making process to bring more knowledge and social awareness to the engineering field and make healthcare more accessible.