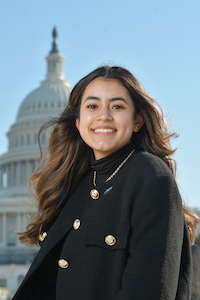 Rosana was born and raised by her working-class parents and a large extended family in Bogotá, Colombia. She attended all her school years in a bilingual school in Bogotá. Until she moved with her father and younger sister to New Haven, Connecticut. She’s currently a junior at Southern Connecticut State University pursuing a B.S. in Political Science with a double minor in Journalism and Environmental Science.

Rosana is involved with New Haven Climate Movement. She has held leadership positions as a Peer Academic Leader, tutoring Spanish to college students, and she often volunteers in community clean-ups of beaches and parks. Rosana is passionate about international relations, specifically U.S. and Latin American relations. Her dad taught her about having a cosmopolitan view of the world which sparked her interest in this career path. Learning about the politics of the two regions she has lived in made her realize how personal and impactful policy prescriptions are. Upon completing her bachelor’s degree, Rosana plans to attend Graduate school for a Master of International Affairs with a concentration on international security policy and a specialization in international conflict resolution.

As a CHCI Intern, Rosana hopes this experience will empower her to be more outspoken about issues that affect immigrants and to get an insight into the legislative process. Rosana is particularly excited to be part of a cohort of young Latinx leaders with similar interests and wants to learn as much as possible to create a positive impact in her community.