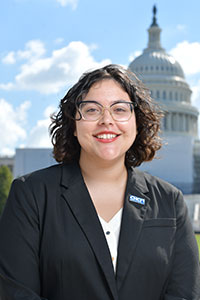 Sophia Sanchez (she/her) is from rural Minnesota with familial roots in Cuernavaca, Mexico. Her hometown branch of the American Association of University Women sponsored her through the National Conference for College Women Leaders, inspiring her to pursue opportunities outside of her comfort zone. Her interest in government stems from growing up in a predominantly white neighborhood while watching her father go through the US immigration process.

Sophia graduated from Smith College with a B.A. in Government, concentration in International Relations, and membership in Pi Sigma Alpha. She was awarded as the Anita Wein Global Studies Scholar for her studies at the Higher School of Economics in St. Petersburg, Russia.
Sophia worked as a research assistant to two professors, studying paradiplomatic Taiwan relations and data use in development & governance. In 2020, Sophia returned to Saint Paul to intern in the immigration services department of the International Institute of Minnesota, supporting community members throughout the progress of their citizenship applications. She remained active in her hometown local government as an election judge for four years. Sophia sought out policy experience by competing as a finalist in the 2022 New York University Policy Case Competition with her team policy “Mitigating Forced Labor in International Supply Chains.” During college, she was a proud member of the Latin American Student Organization and a founding member of Smith College’s competitive Model United Nations team.

As the 2022-23 CHCI Social Equity Public Policy Fellow, Sophia is excited to learn about the legislative process beyond the classroom. She hopes to understand the impact of policy on communities by observing the highest level of democracy in action.