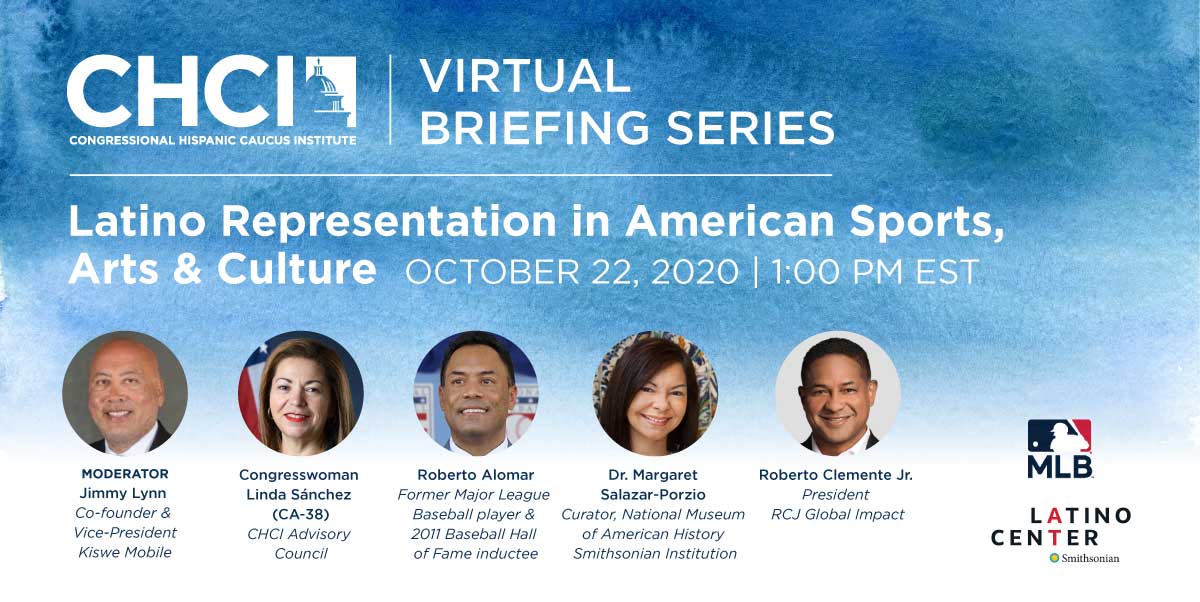 For the past 40 years, CHCI has welcomed over 4,000 Latinos to our nation’s capital as they forged a brighter future for themselves, their families, and the country. As we work to ensure Latino leaders are included in some of our nation’s important institutions, CHCI is excited to honor the Latino community’s lasting contributions to American sports, culture and leadership in a virtual event bringing together stakeholders from the public, private, and non-profit sectors. Join us for a virtual program that will start with a panel discussion highlighting the remarkable accomplishments of Latinos in sports, arts and culture and what needs to be done to ensure continued success and increased diversity when Latinos are projected to account for nearly 30% of the US population by 2050. The virtual event will include a unique virtual exhibit tour of the Smithsonian Latino Center ¡Pleibol! In the Barrios and the Big Leagues/En los barrios y las grandes ligas exhibit highlighting Latinos’ contributions through sports artifacts and stories.

A veteran of 30 years in the Sports and Entertainment sectors, is one of the pioneers of the Digital Sports space and is regarded as one of the leading relationship brokers and connectors in the global sports industry. He is a co-founder and Vice-President of Kiswe Mobile, which is focused on pioneering and powering the next generation of digital fan experiences. Founded in late 2013, Kiswe is a global leader in cloud-based, remote production. Previously, Lynn was the managing partner of JLynn Associates, a global strategic advisory firm focused on sports-related digital media, marketing, and retail for a diverse set of clients including teams, athletes, leagues and associations, media outlets and other businesses. Prior to founding JLynn Associates in 2009, Lynn served as Vice-President, Strategic Development and Partnerships at AOL, where he and his team were responsible for the strategic development and account management of AOL Sports’ strategic partnerships and organizations including the NFL, NBA, NASCAR, MLB, WNBA, NHL, PGA Tour, ABC Sports, CBS Sports, HBO Sports, Sports Illustrated, Turner Sports, NFLPA, WWF, etc.

Lynn also served as a Vice-President, Diversity Partnerships and Strategic Relationships for AOL’s Office of Diversity and Inclusion. In this role, he managed AOL’s employee affinity networks and partnerships with community service organizations.

Lynn has been actively involved in philanthropy and community service over the past 19 years. Lynn was one of the 2006 recipients of Time Warner’s most prestigious public-service prize, the “Andrew Heiskell Community Service” award. This award is given to employees who exhibit outstanding leadership and accomplishment in voluntary public service, human rights and/or equal opportunity efforts. Lynn also was recognized in 2008 by Greater DC Cares as one of Washington DC’s top 10 rising leaders in philanthropy; as one of City Year’s “Idealists of the Year”; and by Year Up as an “Urban Empowerment” award winner. In 2010, he received an award from Washington, DC Mayor Fenty for outstanding community service. Lynn is the Board Chair, National Fitness Foundation, and a past board member, Washington Nationals Youth Baseball Academy. Lynn is an adjunct faculty member at Georgetown University’s McDonough School of Business and also with the Sports Industry Management program in the School of Continuing Studies. He is a Senior Advisor in MSB Office of Executive Education. Lynn received the “SCS Dean’s Outstanding Service” award in 2010 and the “SCS Faculty Service” award in 2014. He has a B.A. in Public Communication and an M.B.A. in Marketing from American University. Lynn received an “Alumni Recognition Award” from AU in 2019 for his community service and philanthropic efforts.

President, RCJ Global Impact
The son of Roberto Clemente and brother of Luis Clemente, Roberto Clemente Jr. spent three seasons in the minor leagues. Signed by the Philadelphia Phillies in 1984, his best season came in his final campaign in 1986 when he hit .229/~.308/.257 for the Charleston Rainbows. Knee and back injuries didn’t help Roberto’s chances and he gave up his baseball career in 1989. Clemente Jr. returned to Puerto Rico and helped his mother make his father’s dream a reality the Roberto Clemente Sports City. In 1992, he brought the RBI Baseball program to Puerto Rico, where he won the first RBI World Series and has won 10 championships since. Clemente Jr. decided to move to Pittsburgh to establish the Roberto Clemente Foundation in 1993 to help bring to the children of this city the RBI program when found out they had no program. He also has worked as a baseball commentator, especially for Spanish-language audiences, but also as a guest analyst on English-language radio broadcasts when the Montreal Expos played some home games in San Juan in 2003 and 2004. In December 2004, he was in the process of organizing an airlift of humanitarian supplies to Nicaragua in commemoration of his father’s ill-fated 1972 relief mission, when the December 26 tsunami hit the Pacific rim. The natural disaster motivated him to ship the goods to affected countries in Asia.

Curator of Latinx History and Culture in the Division of Cultural and Community Life at the Smithsonian’s National Museum of American History with interests and expertise in 20th century visual and material culture; immigration, race, citizenship and national identity; the U.S.-Mexico borderlands; and K-12 education. In this role, Salazar-Porzio has co-curated an exhibit on American cultural identity and immigration called Many Voices, One Nation, which opened in June 2017. She is lead editor of the exhibition book, Many Voices, One Nation: Material Culture Reflections on Race and Migration in the United States (Smithsonian Institution Scholarly Press, 2017), which was recently named one of CHOICE’s Outstanding Academic Titles for 2017. Salazar-Porzio is currently project director and lead curator of the exhibition and book, ¡Pleibol! In the Barrios and the Big Leagues/En los barrios y las grandes ligas, which begins its national tour in Saginaw, Michigan in January 2021 and opens at the American History Museum in Washington, DC on April 1, 2021. Prior to joining the Smithsonian Institution, Salazar-Porzio earned her M.A. (2008) and Ph.D. (2010) in American Studies and Ethnicity from the University of Southern California. She was an Associate Research Scholar and Lecturer at the Center for Institutional and Social Change at Columbia University Law School and received grants and fellowships from the Guggenheim, Rockefeller, and National Science Foundations.

Linda Sánchez is proud to serve as Vice Chair of the House Democratic Caucus, the fifth-highest ranking position in House Democratic Leadership. In this leadership position, she is focused on strengthening the American Dream for men and women all across the country. Linda is the first Latina elected to a leadership position in the U.S. Congress, and the highest-ranking Latino in the House of Representatives.

The sixth of seven children, Linda Sánchez was born in Orange, CA to immigrant parents from Mexico. She attended the University of California, Berkeley, where she earned a Bachelor of Arts in Spanish Literature with an emphasis in Bilingual Education. After working as a bilingual aide and ESL instructor to pay for school, she earned her law degree from the University of California, Los Angeles.

After law school, Linda worked in a private practice before going to work for the International Brotherhood of Electrical Workers (IBEW) Local 441 and the National Electrical Contractors Association (NECA). Prior to coming to Congress, Linda Sánchez served as the Executive Secretary-Treasurer for the Orange County Central Labor Council, AFL-CIO. Linda is still an active and card-carrying member of IBEW Local 441.

Linda Sánchez serves on the powerful and prestigious House Committee on Ways and Means. Ways and Means is the chief tax-writing committee in Congress and also plays a critical role in federal legislation on trade, Social Security, and Medicare. As a member of the Ways and Means Committee, Linda is a steadfast advocate for protecting seniors’ Social Security and Medicare, ensuring U.S. workers and their employers get a fair deal in trade agreements, and reforming the tax code to create an even playing field for the middle class.

Prior to the 115th Congress, Linda Sánchez served in a number of leadership positions. From 2011-2017, she served as Ranking Member on the House Ethics Committee. From May 2014 to December 2016, she served on the Select Committee on Benghazi. In the 114th Congress (2015-2017), Linda served as the Chair for the Congressional Hispanic Caucus (CHC), a 26-member organization dedicated to advocating for the important issues affecting our nation’s growing Hispanic and Latino community.

Linda Sánchez has served in the United States House of Representatives since 2003 and currently represents California’s 38th Congressional District. She is dedicated to reducing crime in our communities, making schools safe for all children, providing quality education and affordable health care, and cleaning up the air and water in Southern California.

Linda Sánchez and her husband, James Sullivan, are the proud parents of Joaquín Sánchez Sullivan, and his Sullivan brothers: Brendan, Jack, and Seamus. Back home in California, the lifelong LA Dodgers fan enjoys taking the family’s miniature Schnauzers, Brooklyn and Scully, on walks along Whittier’s greenway trail and on hikes up to the Turnbull Canyon water tower.

Roberto Alomar is a former Major League Baseball player (1988–2004), regarded highly as a second baseman. During his career, the 12-time All-Star won more Gold Gloves (10) than any other second baseman in baseball history, and also won the third-most Silver Slugger Awards (4) for a second baseman. On January 5, 2011, Alomar was elected to the Baseball Hall of Fame, in his second year of eligibility. He became the first Hall of Fame member to be inducted as a Toronto Blue Jays player. Currently, Alomar serves as a Special Advisor to the Blue Jays. Alomar was a switch-hitter and threw right-handed. He is the son of Sandy Alomar, Sr., a former All-Star second baseman with a 15-year MLB career.