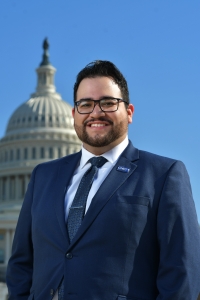 Carlo Flores (he/him/his) was born and raised in McAllen, Texas. Being the son of an undocumented immigrant presented unique challenges to his upbringing. However, through the help of his vibrant bicultural and binational community, he was able to succeed. His experiences living in the Rio Grande Valley taught him the impact of international relations and how it changes lives.

As a first-generation student, Carlo graduated from The University of Texas Rio Grande Valley with a B.B.A. in International Business and a minor in Legal Studies. During this time, he served in Student Government through multiple positions, including Chair of the Senate and Vice President. In this role, Carlo was able to serve over 30,000 students, spearheading the establishment of the school’s first Multifaith Prayer Room and securing an additional 100 laptop devices for need-based student populations following the switch to virtual education as a result of COVID-19. Carlo has also worked on several progressive organizations and campaigns, including the Beto for Texas campaign, where he led his team in attaining a 395% increase in early voter turnout at UTRGV Brownsville and a 281% increase at UTRGV Edinburg compared to the previous midterm election. Outside of school, he has interned with two Members of Congress, assisting the constituents of TX-15 with concerns including immigration and Veterans’ Affairs.

As the CHCI-BP Public Policy Fellow, Carlo hopes to gain further insight into foreign relations and the associated legislative process. He hopes to apply his knowledge and experiences of living in a bicultural and binational community to positively impact and shape a new era of U.S.-Latin American relations.