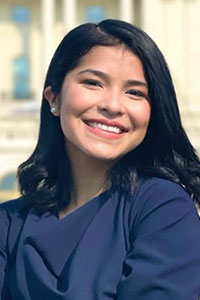 Elizabeth De Los Reyes (she/her/hers) was born in McAllen, Texas, and is the daughter of Mexican immigrants. Growing up as part of an undocumented family in the Rio Grande Valley, a border community at the center of political discourse on national security, molded her worldview. Ultimately, this compelled her long-term goal of affecting social and economic change in the southern border through diplomacy and law.

As a graduate of Cornell University’s College of Arts & Sciences, Elizabeth majored in Government and minored in Latin American Studies. During her undergraduate career, she interned at the Buffett-McCain Institute Initiative to Combat Modern Slavery. Elizabeth reported on the family separation crisis and conducted outreach for communities at risk of human trafficking and forced labor in the Rio Grande Valley. During her senior year, she researched U.S.-Mexico diplomacy and explored the provision of assistance to police forces as a key feature of U.S. engagement with its southern neighbor. Her thesis “Arms and Aid: Rethinking the Leahy Law’s Impact in Mexico” was awarded the Janice N. and Milton J. Esman Undergraduate Prize for outstanding undergraduate scholarship. Additionally, during the winter intersession, she spearheaded the Port of Entry Project, which focused on examining the treatment of asylum-seekers along the border. After graduating from Cornell, Elizabeth went on to work as a litigation legal assistant at Milbank LLP, an international law firm in New York City.

As a CHCI Social Equity Public Policy Fellow, Elizabeth strives to gain a significant understanding of the legislative process at the federal level and in issue areas such as national security and economic and consumer policy. Elizabeth hopes to learn how law and public policy can advance and protect the lives of Latinx communities across the country.