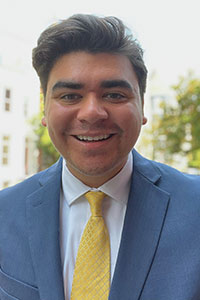 Julian Garcia (He/Him/Él) was raised in the city of Tulare, which lies in the heart of the Central Valley of California. As someone who has lived in the Central Valley all his life, Julian has seen how poverty and lack of strong political representation have been detrimental for his community. Julian’s community and Mexican American roots have heavily shaped his drive to be involved in politics and public policy.

Julian graduated from the University of California, Davis, with highest honors, majoring in Political Science-Public Service and Sociology with an emphasis in Law & Society. During his time as an undergraduate, he was a research assistant for projects that sought to better legal aid for undocumented children in the immigration court system. His interest in research led him to write his senior honors thesis, which investigated the geospatial correlation between historic redlines and congressional district boundaries. He was also an active participant in student government at UC Davis, where he oversaw the re-standardization of the Associations’ guiding documents. Julian became involved in California State Assembly politics starting his sophomore year through interning for a local Assemblymember and working on a campaign for his Assembly District. These state experiences led him to intern with the Washington D.C. Office of Former Senator Kamala D. Harris where he worked closely with the immigration and homeland security staff.

As the CHCI-Altria Public Policy Fellow, Julian hopes to continue to learn more about immigration and educational policy to create comprehensive legislation in the future that will benefit communities like his in the Central Valley.