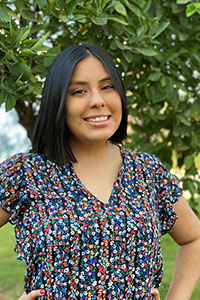 Carolina Olea Lezama was born and raised in Phoenix, Arizona to Mexican immigrants who came to the United States at the young age of 15. Carolina loved growing up in the Valley of The Sun, but her city has also taught her so much about the educational, economic, and other social inequalities. As a first-generation college student, Carolina hopes to use her educational privileges to bring equity to a community she loves.

Carolina is currently a student at Tufts University, majoring in American Studies and Political Science. During her time at Tufts, she has served on the Tufts Community Union Senate once as a class of 2022 senator and will be serving a second term as Latinx Community Senator in the fall of 2020. She has also served on TCU Senate as the Diversity Officer working with other Community Senators and advocating for marginalized communities. Through Tufts’ Tisch College for Civic Life, Carolina has had the opportunity to intern at the national non-profit Hispanic Federation in New York City over the summer as a Tisch Summer Fellow and for the Massachusetts Voter Table in Boston in her sophomore year as a Tisch Scholar.

As a CHCI participant, Carolina hopes to bring her knowledge of advocating in the non-profit sector to policy-making on Capitol Hill and develop her understanding of the legislative process. She hopes to use this experience to one day represent the most vulnerable communities in the city she grew up in.