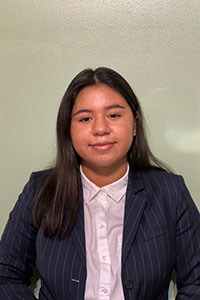 Solcyre is a first-generation college student double-majoring in Political Science and Journalism at Rutgers University-Newark. Her passion for immigration and women’s rights stems from her own identity as a Peruvian immigrant and woman of color.

Throughout the years, she has participated in several programs. Solcyre is currently one of 75 first-generation college students in New Jersey participating as a fellow in the America Needs You program. Before this, she completed a fellowship with The Aspen Institute, where she worked with a cohort of young leaders to create a five-part docu-series discussing the most prevalent problems in Newark. The project spanned across several problem areas; for Solcyre and her group, the immigrant experience of their city was their focal point. In her most recent internship with the NJ Alliance for Immigrant Justice, she advocated for the Let’s Drive NJ campaign to pass legislation that would provide driver’s licenses for the undocumented community.

As a CHCI participant, she wants to learn more about the legislative process and network with other young Latinos who share a similar passion. She hopes to use this experience to further bring about change in her community, and one day, start her own nonprofit.