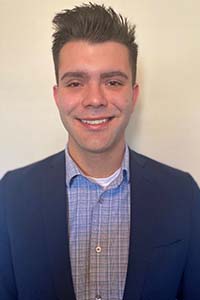 Joseph “Joey” Abeyta was born in San Diego, California, and raised in Rio Rancho, New Mexico. Growing up, Joey was surrounded by family members who worked in government and grew up understanding the importance of being a productive civil servant.

Joey is currently a junior at the University of San Diego, majoring in Political Science while minoring in Economics and Spanish. As a Freshman in college, Joey made the roster of the Men’s Crew Team as a walk-on. After returning from studying abroad in Vienna, Joey was elected as Student Government President at the University of San Diego. After receiving his bachelor’s degree, Joey plans on obtaining a master’s degree in Public Policy. His career goal is to help advocate for increased funding and innovation to our educational institutions as a United States Senator.

As a CHCI participant, Joey aspires to expand his knowledge on all the inputs of the legislative process, while learning valuable lessons in leadership. He hopes to use this insight throughout his career as an aspiring elected official.