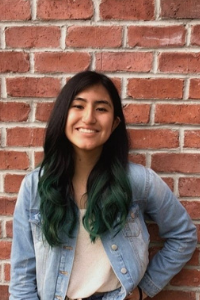 Daniela was born and raised in Southern Idaho. She grew up in the small, rural town of Murtaugh, Idaho, and spent her summers after eighth grade working in farm work. She, alongside her twin brother, are the oldest of six children in her family and are first-generation students, as well.

She is currently attending the University of Idaho and is majoring in International Studies, Spanish, and Sociology. She is a UI CAMP Scholar and is a part of several other organizations including MAS (Movimiento Activista Social), OELA (Organización de Estudiantes Latino Americanos), and ALPFA (Association of Latino Professionals For America). She is the secretary for MAS and the social chair for OELA. She was also involved in Farmworker Awareness Week and joined the planning committee for it.

Daniela has managed to receive a couple of awards during her first year at the University of Idaho including the Valkyries award, the Dean Vettrus award, and she made it onto the Dean’s List. In the future, Daniela is still unsure of what she wants to do, but she hopes to be able to help people and make a positive change in society in whatever she does.

As a CHCI Intern, Daniela hopes to strengthen her leadership skills and learn new ways to effectively create a positive change around her.