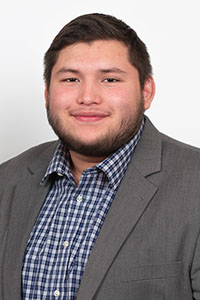 Oliver was born and raised in Waukegan, Illinois by his mother, a Salvadoran immigrant. She came to the United States looking for a better life for her and the son she had left behind. Inheriting her aspirations, Oliver was the first in his family to graduate high school and go to college. Both his mother and his immigrant community taught him the importance of hard work and dedication and he attributes his accomplishments to them.

Oliver is currently a junior at Bates College and majoring in Political Science and Latin American Studies. During his time at Bates, he has made it a priority to be involved in the community and support other Latinx students. Oliver has worked at Bates’ writing center since his first year as a Peer Educator and has also been on the Residence Life team for two years. Additionally, he serves on Bates’ Latinos Unidos club as Vice-President and has been a Peer Support Advisor for LGBTQ+ students on campus.

Upon graduation, Oliver hopes to pursue a law degree concentrated in Immigration Law and to advocate for immigrants who do not have access to legal representation.

As a CHCI Intern, Oliver looks forward to learning more about the legislative process and what it means to be an elected official. He hopes to use what he learns to better advocate for his communities and ultimately make positive sustainable change for them.